"An immaterial force born from pain and sorrow, an insidious virus spreading vice and temptation, corrupting safe and predictable lives and turning them into adrenaline-addicted adventures in a world of mystery and hedonism. The dark music in the schizophrenic journey of a Parisian worldly photographer. For this first foray into production, Keffer wanted to paint a coherent picture, he centered his tunes around the theme of the sea, deep and rich with life, at times tormented dangerous and uncontrollable. The choice of this aquatic theme is a token of Keffer's passion for ancestral Detroit Techno obsessions, yet on this "The Sea" EP he displays these techno influences without letting them cannibalize his own style and vision." Teki Latex

Written, produced and mixed by Keffer in Paris

Remixes produced and mixed by Irfane and Snuff Crew

Thanks to Eric Roth

Illustration of "The battle of 4 days" by Abraham Storck 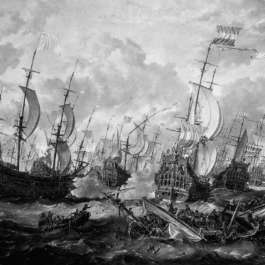